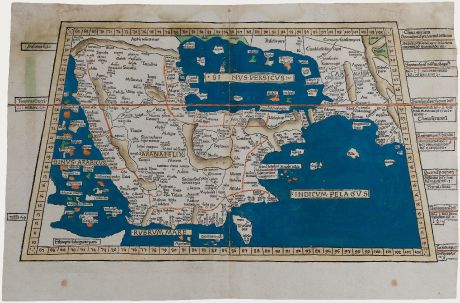 Lienhart Holle
First Edition of an important 15th Century Map of Arabia. Printed in July 1482 in Ulm by Lienhard Holle. After the Manuscript of Donnus Nicolaus Germanus.

One of the earliest obtainable and most desirable printed maps of Arabia. From the first Ulm edition of 1482.

Probably the most beautiful map of the Arabian peninsula and the most sought-after of the Ptolemaic maps of Arabia available to the collector. The third map of the region ever published and one of the earliest map ever printed. From the first atlas printed outside of Italy. This first edition, printed in July 1482 in Ulm, is an example of medieval cartography at its finest.

Untitled woodcut map, showing present-day Saudi Arabia and the Gulf region based upon Ptolemy. With the Red Sea in the east, the Persian Gulf in the upper center and the Gulf of Oman in the west.

Compared to the second edition of 1486, this first edition has no title above the map. Another way to distinguish the two Ulm editions of this map is obvious on verso. The beautiful woodcut border of the 1482 edition is missing on the maps of 1486. The vivid blues are the result of adding crushed lapis lazuli to the pigment and can be found on maps of the 1482 edition only. With Latin text to verso, a large coloured capital and a coloured woodcut border. The Antiqua typeface is the largest used in a book printed in the 15th century.

The last map of Arabia from the first Ulm edition with original blue colour which came to market was sold at Sotheby's London in November 2012.

Upper corners skilfully repaired without affecting the printed area. Waterstained in upper margin. Trimmed on the right side just into the border of the letter press. Stunning, untouched original 15th century colour. No later additions of colour.

Lienhart Holle, also mentioned under the name Leonhart Holl, is considered as the third book printer of the city of Ulm. It is very little known about his life. At least is it verified that he was active in Ulm from 1478 onward.

At the beginning of his activity as a printer he published playing cards. Between 1482 and 1484 several outstanding works of early book printing have been produced in his printing shop. His masterpiece is considered the first atlas printed north of the Alps. The outstanding features of this atlas is extraordinary: The largest Antiqua typeface of the incunabula time, paper of unusual size and strength from Milan and 27 woodcut maps with stunning color. It is the first atlas printed with accompanying text on the verso of the maps and the first atlas with woodcut maps in general.

The blue pigment used by Holle for the colouration of the seas is most probably lapis lazuli, the ultramarine of the Middle Ages and the Renaissance. The price per ounce for the rich blue pigment during the Renaissance correlated with that of gold and was extracted in western Afghanistan.

The exorbitant cost of the production of the atlas led to the bankruptcy of his printing operation. The woodblocks of the maps, the remaining paper and the types passed to Johann Reger, who reissued the atlas in 1486 in a second edition. The colouring of the seas was done with a cheaper brown pigment in the 1486 edition of Reger. Also some of the maps of the second edition can be identified by an additional title on top.

Lienhart Holle died after the year 1492.