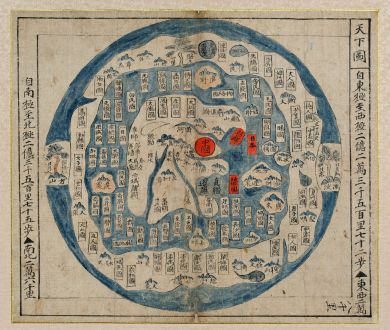 [Korean Manuscript Map of the World]

An early 1800's Korean manuscript world map based on a map produced during the Chinese Ming Empire (1368-1644). The map comes from a traditional Korean manuscript atlas. It is centred on China and shows the world in a Korean perspective.

A traditional Korean manuscript Atlas Chonha-Chido (Atlas of the world) comprehends a map of the world Chonha-Do, a map of Korea, maps of China, Japan, the Ryukyu Islands and regional maps of the eight provinces of Korea.

Shannon McCune stated about Korean world maps: "The world map, or Chonha-Do (Under Heaven Map), has had more attention than perhaps it deserves. As Dr. Nakamura pointed out in his article in Imago Mundi (Vol. 4, 1948), the world map was based on antecedents in Buddhist maps. The many exotic place names were derived from Chinese romantic and mythical accounts, particularly from the Chinese classic the Chan-hai-king written in the third century B. C. The world map has China in its center and shows cartographically the dominant position of the Middle Kingdom in the minds of Korean scholars. The Korean scholar, Ch'an Lee, who has written on this world map, notes that such a map is uniquely Korean. Though the world map and the other maps in the Korean atlases were based on ancient sources, they had an amazing popularity and were copied and reproduced in wood-blocks for many centuries during the Yi Dynasty."

Black ink on thin paper, wash colours in red and blue. The map was framed in Korea during the 1970s. It is laid down on fabric and spanned on a wooden frame with a size of 43 x 47cm. 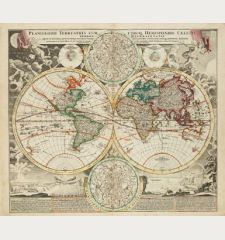 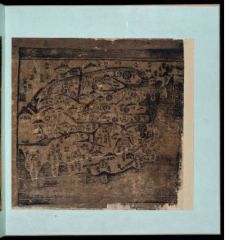