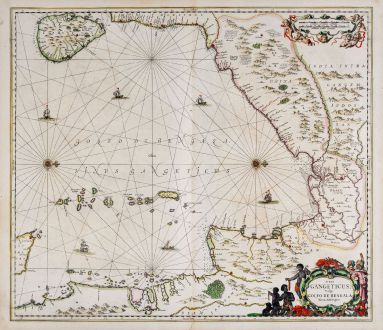 Rare and very decorative, old coloured sea chart of the Bay of Bengal by J. Janssonius. Shows the north-eastern part of the Indian Ocean with Sri Lanka, the east coast of India, Bangladesh, Myanmar, the Andaman and Nicobar Islands, the west coast of Thailand and the northern tip of Sumatra. With north facing to the right. Decorated with rhumb lines, two compass roses, sailing ships, a title cartouche and a mileage scale.