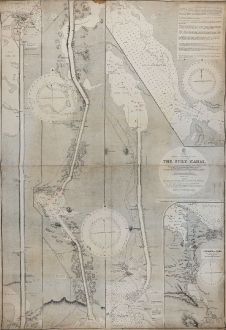 Large and very detailed nautical chart of the Suez Canal of the British Admiralty. Shows the Suez Canal from Port Said to Port Taufiq near Suez. First published in 1879 based on French surveys in 1876.

On top a tear restored and the neat line redrawn. Several tears and small holes backed.

The British Admiralty was the government department responsible for the command of the Royal Navy. They also produced nautical charts under the auspices of the United Kingdom Hydrographic Office (UKHO). The UKHO is a British authority for nautical, maritime and hydrographic matters. It has its headquarters in Taunton, Somerset and was founded in 1795. Admiralty Charts are the nautical charts issued by the UKHO.