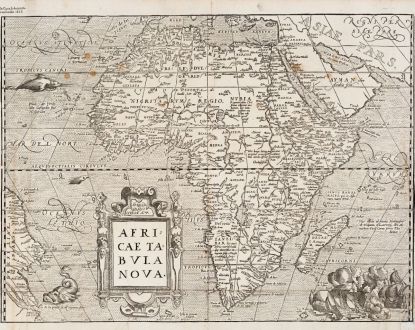 A large and scarce woodcut map of Africa by Francois de Belleforest. Based on Ortelius' map of Africa from Theatrum Orbis Terrarum, but much rarer than the Ortelius map. Extremely fine cut for a woodcut map.

Previously folded to fit into the volume. Staining in upper half. Lower right corner restored and redrawn (~1x1 cm). A large tear to the lower left backed. A fine and dark impression.