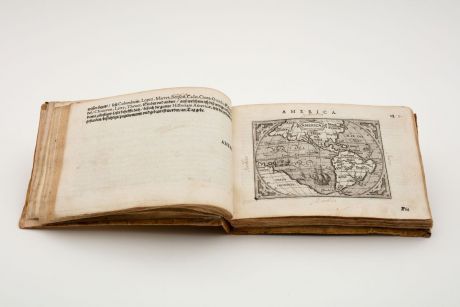 Very Rare and Only German Edition of the Pocket Atlas by Ortelius. With 128 Maps.

Complete and well preserved example of the rare German edition of Ortelius's Epitome. Edited by Levinus Hulsius (Lieven Hulst) and printed together with Jan van Keerbergen 1604 in Frankfurt. The only published edition of Ortelius's pocket atlas with German text. In the last 20 years, only two copies have been offered in trade and at auction, one of them incomplete.

With engraved title page, on verso the coat of arms of Joachim Ernst of Brandenburg-Ansbach, Margrave of the Franconian Principality of Ansbach. Followed by 5 pages of dedication and a 37-page instruction and explanation with 2 engravings in the text. The instructions include a double-page folded map of the world by Hulsius (Shirley 210) surrounded by medallions of the navigators Vespucci, Columbus, Drake, Cavendish, Magellan and Del Cano. The track of Magellan's circumnavigation is marked. The actual map section consists of 127 full-page engraved maps mostly by Jan van Keerbergen and Michael Coignet after Ortelius first published 1602 in Antwerp. Beside the large world map Hulsius has added 4 additional maps from his own publications: No. 7 (Die Insul Madagascar), 20 (Die Insel Iava Maior), 77 (Lappenland) und 78 (Das alte Land Noua Zembla). Each maps with descriptive text. At the end 4 pages of index.

On the endpapers and title several old handwritten ownership inscriptions. In the margins partly marginalia in tiny writing. Several maps with annotations by an old hand.

All maps of this atlas can be seen in high resolution at our Atlas Gallery website: 1604 Ortelius/Hulsius Atlas

Contemporary flexible vellum binding with handwritten title on the spine. The vellum somewhat shrunken, causing the front cover to protrude somewhat. Upper and lower joints and the corners partly restored.