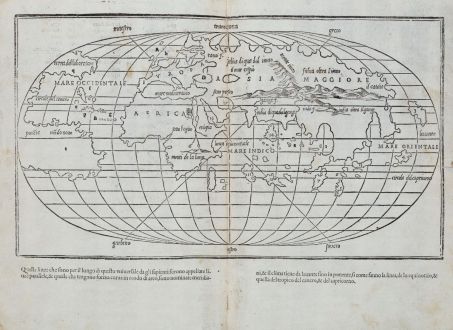 Early woodcut world map by Benedetto Bordone. The world map of Bordone combines geographical information from Ptolemy with new discoveries of the Portuguese seafarers. It is one of only a few world maps prior to Sebastian Münster's map of the world that is still occasionally available on the market.

For a long time, this map was considered the first use of an oval projection on a printed world map. However, an earlier world map of 1508 by Francesco Rosselli, which exists only in a few copies, is also based on an oval projection. It could have served as a template for this map, but whereas Rosselli showed North America as part of Asia, Bordone leaves the west coast of both Americas undelineated. The position of Japan is surprisingly exact for this time and was probably taken from the travelogue of Marco Polo.

Benedetto Bordone: [World map].
Antique woodcut map of the world. Printed in Venice between 1528 and 1565. 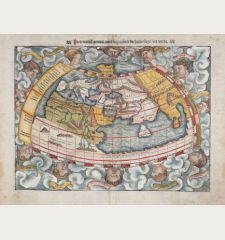