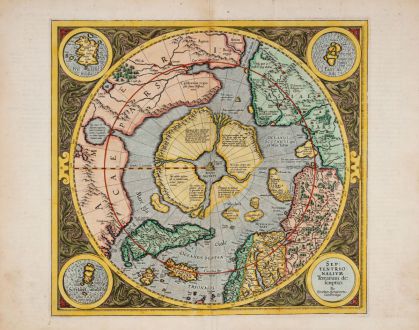 The First Separate Printed Map of the North Pole and the Arctic Regions.

The first printed map devoted exclusively to the Arctic. First published after Gerard Mercator's death (1594) by his son Rumold in the third part of the famous Mercator Atlas in 1595.

In the second half of the 16th century, there was intense speculation about the geography of the polar regions. It was widely believed that there was no land bridge between the northeast of Asia and the northwest of America. Also it was assumed that the polar regions were separated from both continents by the sea. This view was also held by the most important contemporary geographers, including Gerard Mercator and Abraham Ortelius.

Philip D. Burden notes about this map of the North Pole by Mercator:

The author of this map, Gerard Mercator, died in December 1594; it was left to his son Rumold to publish it in the last of the three parts that formed his father's famous atlas, the Atlantis Pars Altera. This is the first map devoted to the Arctic, a hemispherical one on a North Polar projection with an attractive floral design surrounding it. In the corners are four roundels, one of these contains the title, the other three contain maps of the Faeroe Isles, the Shetland Isles and the mythical island of Frisland. The map is largely derived from the inset of the same area on his great world map of 1569. Here, however, its scope is enlarged to the latitude of 60°; this enabled him to depict the recent attempts at finding the North West and North East Passages. The results of Frobisher's and Davis' attempts are recorded, largely derived from Cornelis Claesz's map of the previous year, or possibly Mercator had seen an example of the Emery Molyneux globe produced in London, 1592.

California is identified as Spanish territory and El streto de Anian is clearly shown. The pole itself is made up of four surrounding islands, which myth had it were separated by four strong flowing rivers. These carried the oceans of the world towards a giant whirlpool at the pole where there stood a large rock.

After the first edition in 1595, a second edition was produced in Duisburg in 1602. In 1604, the copper plate was sold to Jodocus Hondius who updated it with new information. This second plate was first published in Amsterdam in 1606. After further editions it was replaced by a new plate in 1636 by Henricus Hondius. This offered map comes from the French edition of the Mercator-Hondius Atlas published 1613 by Jodocus Hondius the Younger. French text on verso.

Gerard Mercator: Septentrionalium Terrarum Descriptio.
Antique map of the North Pole and the Arctic. Printed in Amsterdam by Jodocus Hondius in 1613.