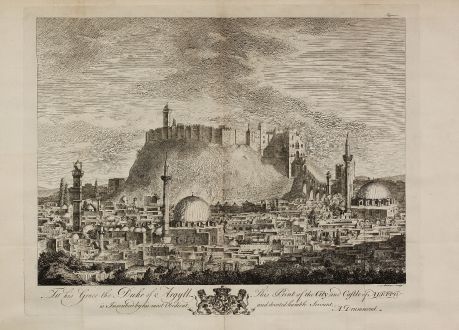 To his Grace the Duke of Argyll, This Print of the City, and Castle of Aleppo, is...

A beautiful and large view of Aleppo in Syria. From Alexander Drummond's travel report 'Travels through different cities of Germany, Italy, Greece and several parts of Asia', published in 1754. The impressive view was engraved by J.S. Müller.

A sharp and early impression, very well-preserved, wide margin, never framed before. Evidence of folds as published in a smaller folio.

Alexander Drummond: To his Grace the Duke of Argyll, This Print of the City, and Castle of Aleppo, is Inscribed by his most Obedient, and....
Antique town view of Aleppo, Syria. Printed in London by Willam Strahan in 1754.

Middle East - Drummond, Alexander - To his Grace the Duke of Argyll, This...