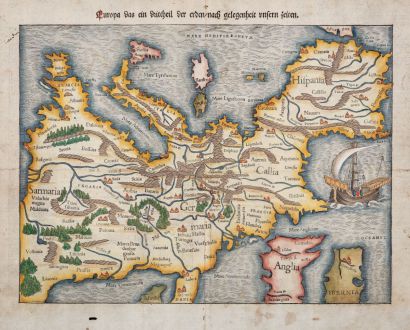 One of the earliest printed maps of the European continent. Curiously oriented to the south. Shows the continent from Constantinople and Greece in the east and Spain in the southwest. With Denmark, England, Scotland and Ireland at the bottom of the map. Decorated with a beautiful sailing ship. Letterpress title on top. A large woodcut border surrounds the title on verso. From the early German edition of Sebastian Münster's Cosmography, titled Cosmographey oder beschreibung aller Länder, published 1550 by Heinrich Petri in Basel. The woodblock of this map was first used in Seb. Münster's Geographia Universalis in 1540.