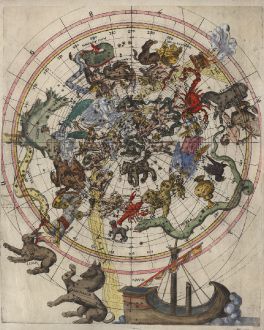 Anonymous
Exceptionally rare star map of the northern sky. Most likely printed in Vienna before 1569.

A large, scarce 16th century celestial chart of the northern sky. We could not locate any bibliographical information about this engraving. It is printed on a paper with a watermark identified as #24004 from Piccard watermark database. The same paper was used for a document from Vienna dated 1569. Consequentially the paper was manufactured in or before 1569.

The following information related to this chart is kindly provided by Elly Dekker:

2. The map is made for the epoch Pt-6° 40'. The stars gamma Ari and alpha Vir, which according to the Ptolemaic stars catalogue have longitude of respectively 6° 40' and 176° 40', are on the map at respectively zero longitude and 170°. This suggests that the maker worked with Ptolemy. For this epoch Pt-6° 40' the colures, equator, north polar circle and the tropics are drawn by full circles.

3. There is another epoch indicated in the map which is about 48° and 'a little more' from the main epoch. If we estimate 'the little more' as 20', we arrive for this second epoch at Pt-55°. For this epoch the colures, equator, north polar circle and the tropics are drawn by dotted circles.

4. There are two scales at the border of the map. The outermost scale numbers signs [1-12, but only a few numbers are marked] but neither scale seem to belong to the elliptic for one of the two epochs marked on the map. There are numbers which mark the longitude fore the epoch Pt-6° 40' inside the innermost scale but these numbers do not agree with the division of the scale.

5. The iconography of the constellation north of the ecliptic is a close copy of the northern map by Dürer of 1515 which is also a stereographic projection from the north ecliptic pole. This northern 'copy' was extended to southern constellations with variations in iconography.

6. The map shows only the classical Ptolemaic constellations because it served a historic purpose. One cannot from this deduce a date. The map is an early example of the type of modern maps one finds in publications of the works of Manilius and Hyginus. There are however to my knowledge no examples known of in the projection of the present map.

7. The date of the map can only be deduced from the historical problem it intents to illustrate. The epoch Pt-6° 40' and Pt-55° are equivalent to about 340 BC and 3800 BC, respectively. The first date is close to Eudoxus but his equinoxes are not at Pt-6° 40'. It seems that the modern maker had some reason to make the beginning of constellation Aries coincident with the equinox. The latter date recalls the Anno Mundi. Jewish and Christian sources cite for this value 3761 BC and 3952 BC. This could point to an illustration in books on Chronology. However, astrologers also showed an interest in the Anno Mundi.

8. The two epochs connected with the map (Ptolemy - 6° 40' and Ptolemy - 55°) are closely connected with the precession theory introduced by Copernicus in his De Revolutionibus in 1541. This theory was short-lived and rejected at the end of the sixteenth century.

9. According to E. Zinner, Entstehung und Ausbreitung der Coppernicanischen Lehre, 1943, p. 277,  there was an astronomer in Vienna, Melchior Klayber, who used data from the Copernican precession theory in 1569 in a publication Praecepta de nova supputandorum motuum coelestium ratione, Vienna 1569.

Concluding the map was printed most likely in Vienna during the second half of the 16th century and is related to the astronomer Melchior Klayber.