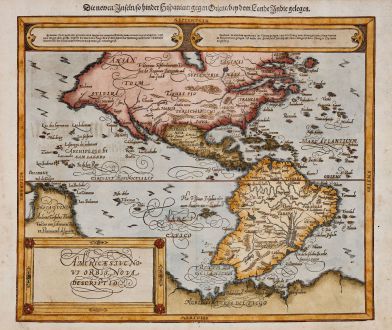 Beautiful original antique map of America by Sebastian Münster. The west coast of North America features Vázquez de Coronado's Quivira, one of the mythical Seven Cities of Gold, as well as the Sierra Nevada. There are also many interesting place names on the east coast.

Philip D. Burden notes about this map of America by Münster:

The geography of the American map particularly had become very out of date. To replace it he [the publisher: Sebastian Petri] relied upon the earlier copperplate map of America by Abraham Ortelius of 1570; it is virtually identical and bears no relation to the earlier Münster. Clearly when the block was cut they had not had access to Ortelius' third plate of 1587 in which he removed the southern bulge to the Chilean coastline. The familiar Ortelian westem coastline of North America and the large unknown southern continent also appear. There were not many editions after this, just 1592, 1598, 1614 and in 1628.

On verso the title with a woodcut element. From the German edition of Sebastian Munster's Cosmography, titled Cosmographey oder beschreibung aller Länder, published 1598 by S. Petri in Basel. The woodblock of this map was first used in Münster's cosmography of 1588.