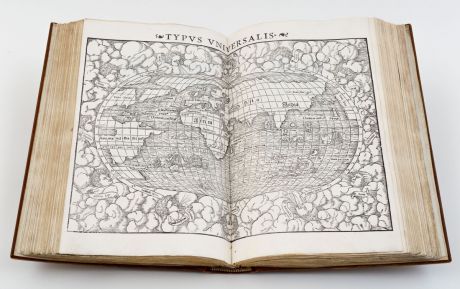 The Geographia of Ptolemaeus with the magnificent woodcut maps of Sebastian Münster. With 27 Ptolemaic maps (World, 10 Europe, 4 Africa, 12 Asia) and 27 new maps drawn by Sebastian Münster and David Kandel (World, 22 Europe, 2 Asia, 1 Africa and 1 America). With the imprint of the French privilege. With 7 woodcuts in the text, one with the portrait of Claudius Ptolemaeus. On verso of each map a brief descriptive text surrounded by a woodcut borders which are occasionally attributed to Holbein. On verso of the map of America Novae Insulae, the printer's device of H. Petri with the publishing date M.D.LII.

Of great importance is the map of the New World, one of the most important maps in the history of American cartography. For the first time, the New World is shown as an entity on a map. It has the earliest appearance of Japan on a map, predating European contact. The Pacific Ocean, Mare Pacificum, is named on a map for the first time. Philip D. Burden writes about Münster's first map of America: "(This map) sealed the fate of America as the name for the New World..."

This edition of the Geographia of Ptolemaeus was commented by Sebastian Münster himself. After the first edition in 1540 four more editions followed. This is the fourth edition of 1552 with an additional treatise and extended indices by Konrad Wolffhart and 6 additional maps compared to the editions of 1540 and 1542.

All maps of this atlas can be seen in high resolution at our Atlas Gallery website: 1552 Ptolemaeus/Münster Atlas

Later brown calf with gilt on spine and cover. New endpapers. With a leather slipcase.

Title page with two library stamps, one of which has been deleted. Carefully cleaned, occasionally a few stains. Complete.