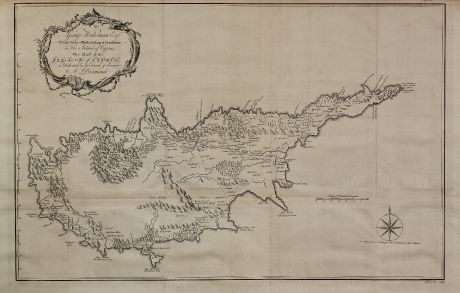 To George Wakeman Esq, Consul for his Majesty the King of Great Britain, in the Island...

Alexander Drummond (†1769)
Antique map of Cyprus. Printed in London by Willam Strahan in 1754.

A very large and rare map of Cypus. This detailed map is based on the personal survey of Alexander Drummond during the year 1745. Drummond's map was published in 1754 within his travel report 'Travels through different cities of Germany, Italy, Greece and several parts of Asia'.

Drummond has been travelled to Cyprus twice, first in 1745, where he stayed at the house of the British consul George Wakeman in Larnaca, to whom the present map is dedicated. He has tried to correct the mistakes of previous cartographers. Nevertheless Navari mentioned: 'The shape of the map is only marginally better than that of Pococke... Nonetheless, (it) is one of very few produced from personal observations during the Turkish occupation of Cyprus'.

Stylianou notes to this map:

'In Cyprus, he was the guest of the British Consul in Larnaca to whom he dedicated the map of Cyprus he compiled during his travels in the island: To George Wakeman Esq.r, Consul for his Magesty the King of Great Britain, in the Island of Cyprus, This Map of the Island of Cyprus is Dedicated by his Friend & Servant A. Dru(m)mond. In the bottom right corner, outside the frame of the map, we have the signature of the engraver: J. S. M. Sculp. [J. S. Müller]

Drummond went round the island following almost the same route as Pococke, but he did it the other way round, i.e. clock-wise. He also went across the island from Larneca to Nicosia. He also penetrated as far as the Monastery of Kykko which he marks as Madonna di Chekka. From his writings, it appears that he also had in mind old geographers and cartographers, whom he constantly tries to correct according to his geographical system as he expressly states, often with disastrous results. For example, in his account he remarks, Couclia I substitute in the place of Arsinoe upon the ancient charts and on his map he enters it as Covelia olim Cythera. Having done this, he then proceeds to fix old Paphos at the port of Baffo in his text, as well as on the map, as Paphos Antiqua. Paphos Nova in his text is entered as Baffo on his map, in the position of modern Ktima. In this way he is inferior to Pococke.

The shape of the map is an advance on that of Pococke, but a retrogression as compared with the maps in the line of development of Iacomo Franco, Ortelius, Blaeu, Janssonius, Coronelli, although Drummond himself does not think so. From what he writes, he considers himself a better geographer and cartographer than his predecessors. As in the positioning of the places, so in the features of the island, he is constantly trying to correct them. Although his latitude setting the island between 34° 34' and 35° 48' is almost correct, his 35th parallel intersects near Paphos, which is the Ptolemaic positioning. It is pointed out (by the compass on the map) that no allowance is made for the variation of the compas.

In the account of his itinerary, he says that he corrected the bay of Limassol and he knows he is right, because my account proceeds from an actual survey, and, I believe, most of my predecessors depended upon hear-say... I took the bearings and distances of everything there inserted ... Which of his predecessors he had here in mind we do not know, but he says that the French Consul showed him a very old charte.

In spite of its defects, Drummond's account and his map are worth studying, especially his place-names. He recorded these from the mouth of the people as he heard them, sometimes correctly and sometimes as his English ear perceived them (like Pococke). Examples: Carava, Agios Largos (St. Hilarion), Dela Pays, Ag. Bernaba (St. Barnabas), Lathrangomis, Canakarga, Piscopi, Pisouri, Gierosibon, Imba, Theletra, Palopanaioti (Kalopanayiotis), Scourgodisa, Kalosorgo, etc. A new introduction to the map are the Diamond mines in the Paphos area. His Gierosibon is of cource the present Yeroskipos (Hieros Kepos), the ancient Hierokepia connected with Aphrodite. Unaware of what was hiding under the popular version of the name, Drummond, in his text, places Hierokepia at his Lesata or Mandraka, a few miles before his Gierosibon. He, however, rightly differentiates between Olimpus Mons (Troodos) and Monte Croce or Mamilla Montis Olympi. His route is also marked on the map, which appears to reflect in a way the Roman road system.

Drummond's map was further exploited in France as it is evident from two manuscript editions now in the Bibl. Nat. Paris.'

A very clean and well preserved copy. Very good condition. Evidence of folds as published in a smaller folio.

Alexander Drummond: To George Wakeman Esq, Consul for his Majesty the King of Great Britain, in the Island of Cyprus. This Map of the Island of....
Antique map of Cyprus. Printed in London by Willam Strahan in 1754.

Cyprus - Drummond, Alexander - To George Wakeman Esq, Consul for his...