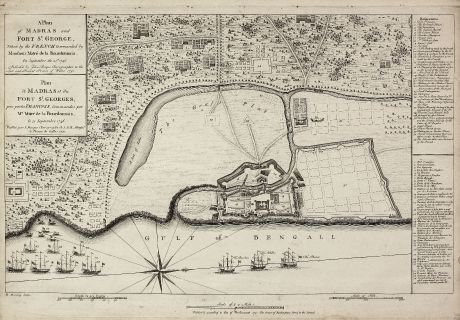 A Plan of Madras and Fort St. George, Taken by the French, Commanded by Monsieur Martre...

A very rare plan of Madras during the Carnatic Wars

This copper engraved plan of Madra in India was published by John Rocque in 1751 and engraved by one of his employees Robert Benning.

It shows Madras during the Carnatic Wars. The war marked the beginning of the power struggle between Britain and France in India and of European military ascendancy and political intervention in the subcontinent. Major hostilities began with the arrival of a naval squadron under Mahé de la Bourdonnais, carrying troops from France. On 21st September 1746 Bourdonnais landed his troops near Madras and laid siege to the port, which is documented on this plan. The ships of Bourdonnais are labelled with 'The Bourbon - The Achilles - The Phenix'. The title is printed in English and French as well the 35 number key on the right is bilingual.

We only could locate two copies of the Rocque Madras plan. One in the University Library of Bern, another one in Yale.

For a detailed biography of John Rocque and a list of his works, see Map Forum Issue 3 online at http://www.mapforum.com/05/may.htm

Strong and clear impression, small binding holes in top margin, cut on left and right plate mark with 1cm margin to the engraved frame, minor soiling in margin. Very good condition. It is quite unusual to find a separate published map in such preservation.

John Rocque was an English engraver, active in London from 1734. He is best known for a 24-sheet plan of London published in 1746.