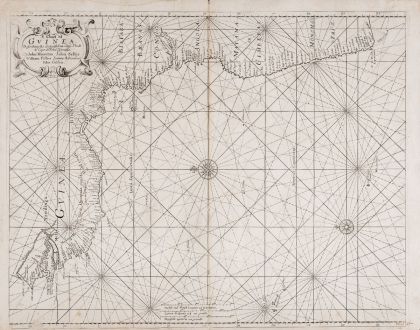 Very rare sea chart of West Africa by John Seller. This beautiful sea chart shows the coast of Africa from Senegal, Cape Verde, along the West African coast to the Gulf of Guinea, across the coasts of Angola and Namibia to the Cape of Good Hope. East is shown on top. Top left a title cartouche, in the seas two compass roses surrounded by loxodromes.

This is the first version of the map during the cooperation of Seller, Thornton, Fisher, Colson and Atkinson in the years 1677-79. There exists another map, most probably a copy of this map, with many changes and a new cartouche with the title A Chart of the Coast of Guinea.

On double paper as often if a map comes from a maritime atlases. Centrefold backed with Japanese paper, the lower left margin slightly rubbed off. A uncut copy. Very good condition.

John Seller was an English map and chart maker, a map and chart seller and an instrument maker. He published maps, atlases, almanacs and astronomical charts, as well as the first significant practical manuals for sailors. In March 1671 he was appointed Hydrographer of the King. Seller had a son Jeremiah, occasionally also John jr., who had learned from him and also worked as a cartographer, publisher and map maker in a collaboration with Charles Price.

The trade in nautical charts was dominated by the Dutch until the second half of the 17th century. Seller often used Dutch nautical charts and replaced the original title with an English one. Between 1671 and 1675 Seller published the first four books of The English Pilot. During the fifth book in 1677 he ran into financial difficulties and entered into a partnership with John Thornton, William Fisher, John Colson and James Atkinson. But this partnership was short-lived and the consortium took over most of Seller's map business. The English Pilot was very popular and appeared in many editions until the end of the 18th century. Around 1700 it was published by Thornton and Fisher, after Thornton's death in 1708 his son Samuel took over the business. But he died shortly after, and the stock was acquired by Mount and Page.

John Seller's most important atlases appeared in London with the following titles: