Old coloured antique map of Denmark by Gerard Mercator. Shows Denmark with Holstein and Mecklenburg with Rügen in the south and south Sweden in the north. Top right a title cartouche, in the North Sea below left a whale. From the Latin edition of the Mercator-Hondius Atlas of 1613/19. Latin text on verso.

In the left white margin a tear-off pasted over during old time, centrefold backed, in the right margin slightly waterstained. 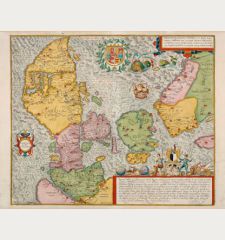 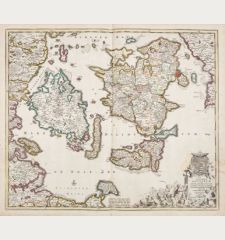