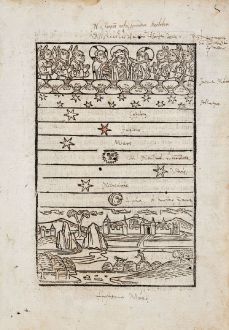 Very rare and early woodcut of the celestial spheres by Konrad von Megenberg. From the incunable Buch der Natur or Book of Nature printed by Anton Sorg in Augsburg in 1482.

This full-page woodcut from the 15th century shows the medieval conception of the heavenly spheres according to Aristotle's cosmology. At the bottom is the earth, then a layer with fire, the lightest Aristotelian element. Above are bands for the Moon, Mercury, Venus, the Sun, Mars, Jupiter and Saturn. The Moon and the Sun are illustrated, while the planets are shown as stars. Above the layers of fixed stars and the angels in heaven.

Manuscript notes and underlining by a contemporary hand on both sides. The individual spheres are inscribed.

Konrad von Megenberg, also Konrad von Mengelberg or latinised Conradus de Montepuellarum was a theologian, university commissioner and writer. He was born 1309 in Mäbenberg and died 1374 in Regensburg. His main work, the Buch der Natur or Buch von den natürlichen Dingen deals with natural history topics and was written between 1348 and 1350. It is considered to be the first important scientific compendium in German language and quickly found wide distribution in more than 100 manuscripts. The first edition of the encyclopaedia was published in 1475 by Johann Bämler in Augsburg and was the first illustrated printed book on natural history. Bämler published two more editions in 1478 and 1481. Another Augsburg incunabulum print was made by Anton Sorg in 1482. The Buch der Natur was published until 1536 and 1540 as Naturbuch in Frankfurt.