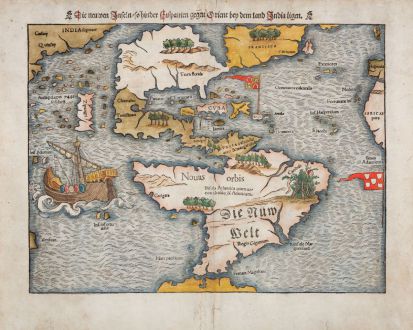 Early state of Sebastian Münster's woodcut map of the New World. This map of America is one of the most important maps in American cartography.

P. Burden notes about this map:

The map's inclusion in Münster's Cosmography, first published in 1544, sealed the fate of 'America' as the name for the New World...

The title on verso is surrounded by a beautiful woodcut border. The woodblock of this map was first used in Seb. Münster's Geographia Universalis in 1540. Münster was one of the first to create space in the woodblocks for the insertion of place-names in metal type. In the follow the text was changed frequently and the identification of the different states of the map is possible. This example comes from the German edition of Sebastian Münster's Cosmography, titled Cosmographey oder beschreibung aller Länder, published 1550 by Heinrich Petri in Basel. This is the 5th state of total 13 states.

The centrefold, a tear to the upper right and small tears in the margins backed. Very good condition with beautiful colouring.