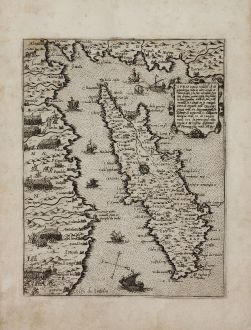 A very rare, early map of Cyprus from Camocio's Isole Famose. This copy is printed from the first state of the plate, without the number in the lower right corner. The map is extremely rare and very hard to find on the market.

Stylianou notes to this plate:

The map of the island appears to be a recension of that by Paolo Forlani already described. There are some eliminations of place-names around the coast and some additions in the interior, which is divided into the same 11 districts. Nicosia retains its diagrammatic plan as a cartographical symbol.

There is no imprint or any indication in the descriptive note about the date of issue of the map. On the coast of Caramania, however, there are depicted several formations of Turkish troops - foot-soldiers and cavalry - apparently in preparation for the attack on the island in July 1570. In this context, a date before July 1570, can be suggested for the map.'

With original wide margin, which is rare, since sheets from Camocio's Isole Famose often cut along or within the plate marks. Old ink scribbles on back side, resulting marginal shine through left to the cartouche. One small worm hole in the upper left corner. Some minor staining mainly in margin. Outer margins (~4mm) backed verso with Japan paper. Offset image on verso from another print of the same plate from stacking the sheets during printing process, while the printers ink was not dry. A very good and strong, early impression of the plate. 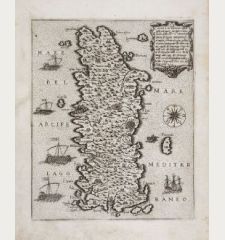 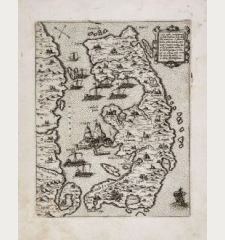