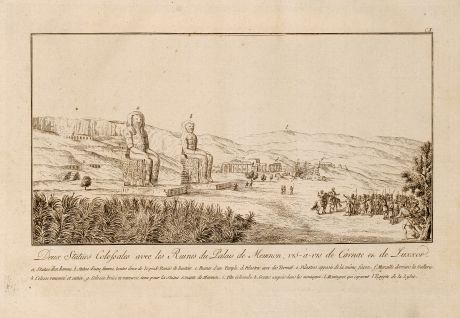 Copper engraved view of the Statues of Amenhotep III and the Colossi of Memnon close to Carnac and Luxxor in Egypt. Engraved after Marcus Tuscher (1705-1751).

Frederick Louis Norden, an eminent Danish traveller, was born 1708 in Gluckstadt, Holstein. He was a volunteer in the British fleet under Sir John Norris in the Mediterranean, having been previously sent by the king of Denmark to Egypt, to make drawings and observations of the ancient monuments of that country. These he executed with great fidelity, and his Travels in Egypt and Nubia. with plates, were splendidly printed in 3 vols. folio. Being elected a member of the Royal Society of London, he presented to that learned body his drawings of ruins and colossal statues at Thebes, of which he also published a memoir. Died, 1742. (Maunder, S. The biographical treasury. New ed. 1870.)