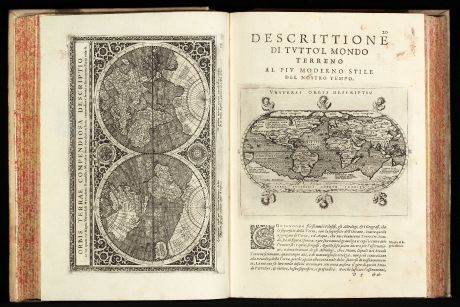 The first edition of Leonardo Cernoti's Italian translation of Ptolemy's Geografia based on the 1596 Latin edition of Magini published by G. B. & G. Galignani in 1597-98. The beautiful engraved maps are attributed to Girolamo Porro and have been also used in Magini's translation of 1596.

The beautiful maps have been engraved by G. Porro. Mentionable the three 'modern' world maps, first the full sheet map (Shirley 194) showing a classical late 16th century configuration of the world with a large "Terrae Australis" in the south, the Northwest passage with unusual shape of the North Pole and the bulky west coast of South America. Also the mythical islands in the Atlantic are present. Shirley mentioned, 'it's the artist's credit that so much detail have been represented with such fineness and clarity... This small Mercator-Porro map is a worthwhile collector's item, particularly as the larger Mercator world map is becoming increasingly scarce.' The second modern world map is a reduced version of the 1570 Ortelius map, surrounded by six wind heads (Shirley 195). Magini's mariner's map (Shirley 196) follows Gerard Mercator's large world map of 1569, with fanciful addition of chains of mountains across the souther continent. Beside the world maps, four continental map of Asia, Africa, America and Europe are included, whereas the Africa map showing parts of Brazil and the Asia map also including elements of America. There are three other maps with parts of America: 'Scandia, sive Regiones Septentrionales' showing the north Atlantic with parts of Labrador (Burden 98), 'Tartariae Imperium' with Japan, parts of Canada and California (Burden 95), and finally 'India Orientalis', the attractive map of south-east Asia with the west coast of North America.

Giovanni Antonio Magini, born 1555 in Padua, was Professor for Astronomy, Astrology and Mathematics at the University of Bologna. He was the first Italian publishing an Atlas of his own country. He also prepared a new edition of the Geographia of Ptolemy, which was first published in 1596. The maps have been engraved by Girolamo Porro. He died 1617 in Bologna.