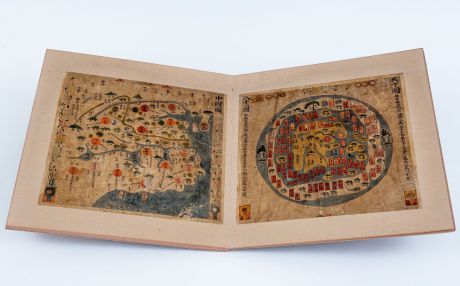 Album with 12 manuscript maps from a traditional Korean manuscript atlas, drawn in the late 18th century. With a China-centered world map (Chonha-Do), a map of China with Korea, two maps of the Ryukyu Islands and 8 maps of the Korean provinces. The map of China prominently depicts the Great Wall and the Yellow river (Huang He) and Yangtze rivers.

The manuscript maps are extremely elaborately drawn with the addition of many details. The margins are partly decorated with flowers, plant tendrils and birds, several mountains are depicted as fire-breathing volcanoes or covered with snow. The maps are drawn on very thin rice paper and were mounted during the 1970s in Korea by an experienced bookbinder into an album in a double concertina format made in traditional Korean craftsmanship. The covers and all pages of the album are covered with Korean fabric. The size of a single map is about 34 x 31 cm, the album size is 41,5 x 40,5 cm.

A Ch'onha chido (Atlas of the World) is a traditional Korean atlas made between the mid-18th century and the beginning of the 19th century. Mostly such an atlas contains manuscript maps, more rarely also woodcut maps. The maps of a Ch'onha chido are based on maps made during the Chinese Ming Dynasty (1368-1644).

The world map, or Chonha-Do (Under Heaven Map), has had more attention than perhaps it deserves. As Dr. Nakamura pointed out in his article in Imago Mundi (Vol. 4, 1948), the world map was based on antecedents in Buddhist maps. The many exotic place names were derived from Chinese romantic and mythical accounts, particularly from the Chinese classic the Chan-hai-king written in the third century B. C. The world map has China in its center and shows cartographically the dominant position of the Middle Kingdom in the minds of Korean scholars. The Korean scholar, Ch'an Lee, who has written on this world map, notes that such a map is uniquely Korean. Though the world map and the other maps in the Korean atlases were based on ancient sources, they had an amazing popularity and were copied and reproduced in wood-blocks for many centuries during the Yi Dynasty.

All maps of this atlas can be inspected in high resolution on our Atlas-Gallery website: Korean Manuscript Atlas, late 18th Century

Some maps slightly damaged in margins, partly some staining. The album itself is in excellent condition and will preserve the originally very fragile maps for the next centuries.

Atlases - Anonymous - Ch'onha Chido [Atlas of all under Heaven]