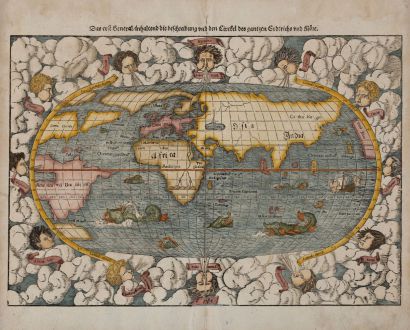 Early woodcut world map by Sebastian Münster. This 'modern' map of the world is an oval projection with a vigorous surround of clouds and lusty windheads. German letterpress title on top, a beautiful woodcut title vignette on verso. This woodblock was prepared for the 1550 edition of Sebastian Münster's Cosmographia. With the woodcutter's initials DK, identified as those of David Kandel in the lower left-hand corner. A sailing ship and several fierce sea monsters occupy the oceans.

The Americas taking on an unusual shape, North America is labled Terra Florida and is almost separated by a deep cleft of water, often referred to as the Sea of Verazano. Further north a huge landmass extending as far as and joining onto Scandinavia. The west coast of North America is hypothetically drawn and appears on the right side of the map. It carries the name Temi stitan, which is generally used to denote Mexico. In Africa, the twin sources of the River Nile terminating in a range of mountains. Unidentified islands Grisonum and Calensuan are placed in the proximity of Australia. The hypothetical continent Terra Australis is present but small, only serving to form the Magellan Strait.

The geographical sources of this map is a combination of information derived from Verrazzano's explorations of 1522-24, where the waters of Chesapeake Bay were mistaken for the Indian Ocean and reports of Cartier's voyages of 1534-35, who explored the Gulf of St. Lawrence and was hoping to discover a western passage.

Lower half of centrefold backed, evidence of some minor creases, minor staining in margin. A very good example with beautiful colours. 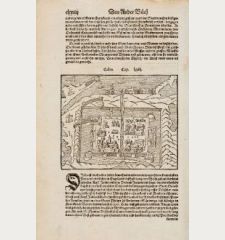