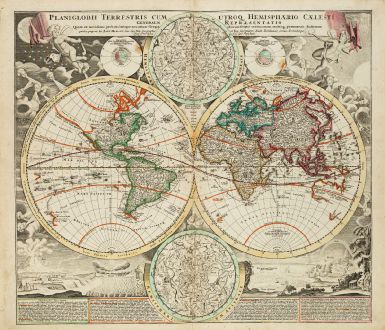 Old coloured antique world map by Johann Baptist Homann. With a southern and northern celestial chart and two diagrams about the movement of the sun. In the background windheads and natural phenomena like volcanoes (Etna), earthquakes, tides, geysers in Norway and a rainbow. With the imperial privilege below the title, which was granted to Homann in 1715.

Australia is still incomplete, but already with place names and notes of early discoveries. Both, the east coast of New Zealand with the route of Abel Tasman's first expedition in 1642 and the route of the circumnavigation of the world by Magellan are shown. Remarkable for the early 18th century are the geographical details in Southeast Asia with Japan and the northwest coast of North America.

In the right half a slight fold, in margins somewhat stained and browned. Very good condition with original old colour.