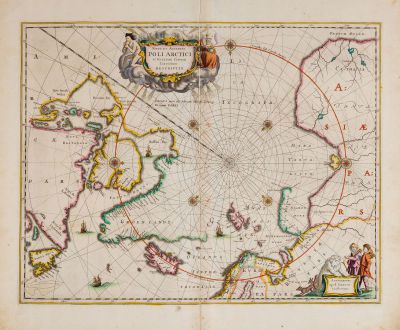 Old colored sea chart of the North Pole by J. Janssonius. With Greenland and Canada, Iceland, Spitsbergen, Norway and the north coast of Russia. The map shows, the famous Northwest Passage, a connection between the Atlantic and the Pacific in the north of North America, does not exist.

This map first appeared in the Latin Appendix of 1637 alongside the one it would eventually replace... Loosly based in format on his own Atlas minor plate of 1628, cartographically it draws upon the Hondius, 1636. It did, however, end up being the prototype of many later maps such as Willem Blaeu, c. 1638, and Moses Pitt, 1680.
The unknown north-west coast is conveniently hidden behind a decorative title cartouche. Two foxes, two hunters and a polar bear grace a second cartouche bearing the imprint. One unusual feature of this map is the attempt to show rhumb lines on a polar map...