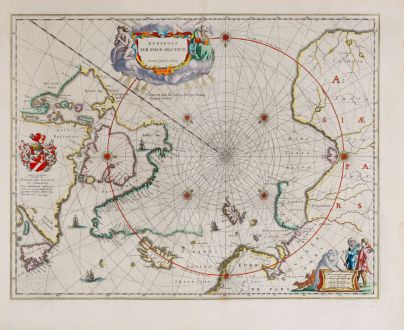 Old coloured sea chart of the North Pole by Willem Blaeu. With Greenland and Canada, Iceland, Spitsbergen, Norway and the north coast of Russia. The map shows, the famous Northwest Passage, a connection between the Atlantic and the Pacific in the north of North America, does not exist.

The unknown north-west coast is conveniently hidden behind a decorative title cartouche. Two foxes, two hunters and a polar bear grace a second cartouche bearing the imprint. One unusual feature of this map is the attempt to show rhumb lines on a polar map...

A tear left of lower centrefold in the wide margin backed, a wormhole in upper margin in centrefold backed. Very good conditions with striking old colours.