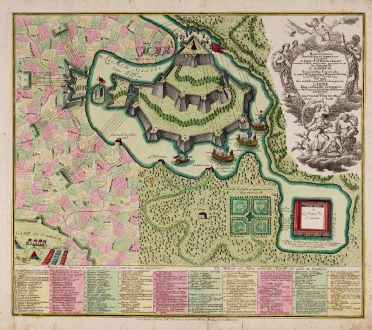 Seutter's famous allegorical map representing the battle of the sexes and of love. In style of a typical 18th century battle plan.

Jeffrey N. Peters describes this map in The History of Cartography, Vol 4, Allegorical and Satirical Maps, as follows:

The German publisher Matthäus Seutter included a map showing the attaques de l'amour in his Atlas novus. This bilingual map in German and French describes, as the legend says, a "methode of defending and preserving one's heart against Love's attacks." It combines both the battle plan of Callières's allegory - a military fort surrounded by a Glacial Sea (La Mer Glacee) and assaulted by the cannon blasts of pleasure and desire - with Scudéry's cartographic language of negotiated seduction.

At the bottom a bilingual index in German and French with innumerable methods to defend and protect the heart against the attacks of love.