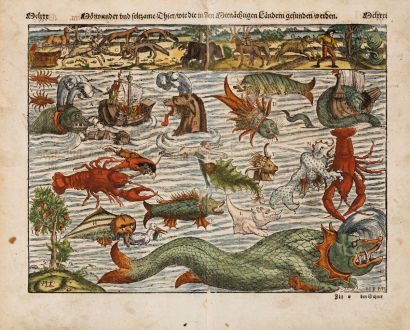 Sebastian Münster (*1489 - †1552)
Beautiful coloured woodcut of sea and land monsters. Published by Heinrich Petri and printed in Basel in 1574.

One of the most sought after 16th century curiosities.

The famous charts of mythical sea and land monsters by Sebastian Munster in beautiful colours. With fantastic fishes and lobsters attacking boats and each other. Above a smaller strip with various deer, bears and snakes.

The monsters are derivative from the Carta Marina of 1539 by Olaus Magnus which is preserved in two copies only. The chart gives a unique view of Renaissance attitudes toward the unknown lands beyond the civilized world.

From the German edition of Sebastian Münster's Cosmography, Cosmographey oder beschreibung aller Länder. The sheet was published 1574 by Heinrich Petri in Basel. Verso a small map centred on Transylvania.