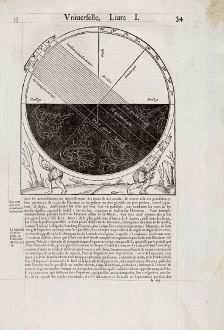 Francois de Belleforest (*1530 - †1583)
A symbolic description of the tropics. Printed in Paris by Nicolas Chesneau, Michel Sonnius in 1575.

A depiction of the tropics where the sun is in Zenith during the solstice.

Francois de Belleforest: [Tropic of Cancer - Tropic of Capricorn].
A symbolic description of the tropics. Printed in Paris by Nicolas Chesneau, Michel Sonnius in 1575.