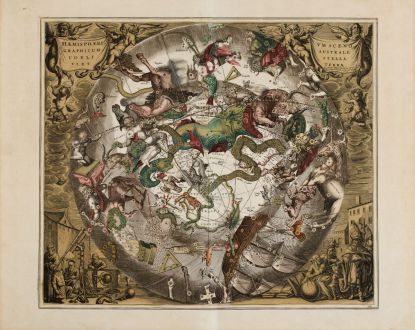 Spectacular Star Map of the Southern Sky by Andreas Cellarius.

This celestial hemisphere shows the classical constellations of the southern skies over a globe showing South America, Southern Africa and the South Pole labeled Terra Australis Incognita. In the bottom corners astronomers surrounded by a telescope are shown. The title banners are held by grotesques winged creatures. The monochromatic color scheme of the surroundings emphasizes the spherical shape and focus the viewer's attention to the center.

The chart comes from the star atlas Harmonia Macrocosmica Seu Atlas Universalis Et Novus and was first published by J. Janssonius in 1660. This sheet is from the reissue by Valk and Schenk in 1708.

Some browning, especially on verso. A small tear in the image backed with Japan paper. A few tiny wormholes. A good copy with attractive original old colours.

Andreas Cellarius was an astronomer, mathematician and cosmographer, born in Neuhausen near Worms. In 1614 he studied at the University of Heidelberg and got married in Amsterdam in 1625. From 1637 onward he served as rector of the Latin school in Hoorn. In 1660 he published his outstanding star atlas, the Harmonia Macrocosmica with Johannes Janssonius in Amsterdam. The star atlas is considered as one of the most spectacular work of art in the history of astronomy and consists of 29 double page copper-engraved plates. The atlas is also known as the Cellarius-Atlas and was reissued by Valk & Schenk in 1708.

In 2008 the minor planet 12618 Cellarius was named after Andreas Cellarius.