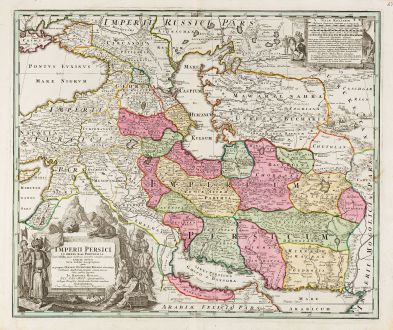 Beautiful old coloured map of the Persian Empire by Johann Baptist Homann. Shows Iran, Iraq, Syria, the Persian Gulf, the Caspian Sea as well as parts of the eastern Mediterranean with Cyprus and the Black Sea in the north east. Decorated with an aesthetic and fine title cartouche with leopard and lion. On the top right, a cartouche with a mileage scale.