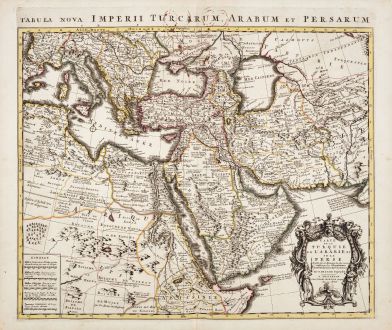 Old coloured map of the Turkish Empire, Arabia and Persia after Guillaume de l'Isle. This is the Covens & Mortier edition of the detailed map by G. de l'Isle. With the eastern Mediterranean, the Red Sea and the Persian Gulf. To the left the northeastern part of Africa with Egypt, Libya, Ethiopia and Somalia. With Turkey, the Arabian Peninsula, Iran and Pakistan. In the north the Mediterranean Sea, the Black Sea and the Caspian Seas. To the lower right a beautiful title cartouche.