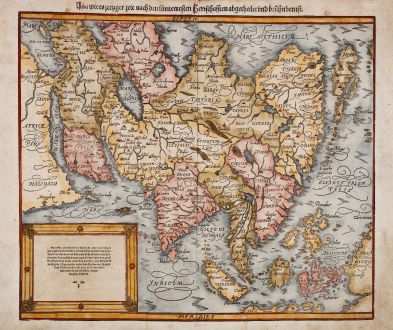 First edition of the second map of Asia by Sebastian Münster. Shows Asia as a continent from Turkey to Southeast Asia and Japan. With a sea monster and a title cartouche. On verso the title with a woodcut element. From the German edition of Sebastian Munster's Cosmography, titled Cosmographey oder beschreibung aller Länder, published 1588 by S. Petri in Basel. The woodblock of this map was first used in Münster's cosmography of 1588.