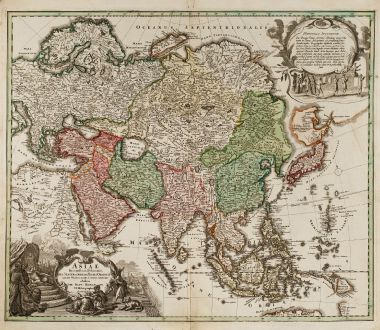 First edition of J.B. Homann's map of Asia. Still without Kamchatka, but with the big island of Terra Yedso above Japan. Compagnie Land to the upper right could be an early representation of Alaska or a misrepresentation of Hokkaido. With an outline of Nova Hollandia and Carpentaria, both parts of Australia. Also mentioned the Dampier Strait, named Dampieri, separates New Guinea and New Britain. Decorated with a beautiful title cartouche showing a Sultan on his throne and a large cartouche to the upper right showing a procession carrying a Hindu idol.

Some damage to the corners, lower centerfold backed, verso some notes to the lower right corner about Homann by a ball-pen. Otherwise a very good copy.