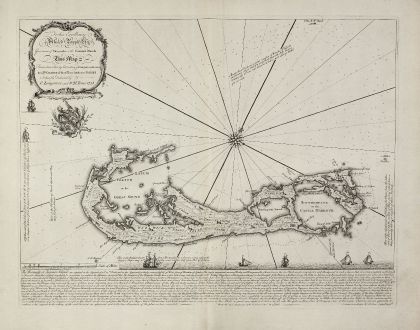 To his Excellency Alured Popple Esq. Governour of Bermuda, or the Summer Islands. This...

Important and exceptional rare sea chart of the Bermuda Islands

Clement Lempriere's chart of Bermuda, published in 1738, was the next major advance after Arent Roggeveen chart published in 1675 by Goos. Its influence is visible in subsequent maps and charts of the islands to the end of the century. This chart is quite rare and not mentioned in Tooleys Directory, nor could we locate a copy of this map in public libraries, except one in the British Library as part of the King George III Topographical Collection.

Complete Title:
To his Excellency / Alured Popple Esq. / Governour of Bermuda, or the Summer Islands / This Map / From a new Survey, Correcting y.e Dangerous Errors / in all y.e CHARTS of that Place hitherto Publish'd / Is humbly Dedicated by / C. Lempriere, and W.H. Toms. 1738.

Additional bibliographical information on the chart:
Sold by S. Harding on the pavement in St. Martins Lane & by W.H. Toms Engraver in Union Court near Halton Garden Holbourn (below the mileage scale)
Publish'd by C. Lempriere, & W.H. Toms Octo.br the 23.d 1738. (below the engraved text)

The chart was sold in 1738 as single sheet by S. Harding in London and was not bound in regular atlases. A later modified and reengraved version of the map 'The Bermudas, or Summer's Islands. From a survey by C. Lempriere ...' was published in Thomas Jefferys Maritime Atlases, first in the 'West-India Atlas' of 1775 and in 'Neptune Occidental ... Pilot for the West-Indies' of 1778. According to 'Map Forum Issue 3' a second state of the map exists, described by Palmer thus: "Price 2 shillings without the imprint of Hardings [sic !] and Toms". But the author has not seen such state.

Dark and clear impression. Margins uncut, unremarkable crease alongside the centrefold, almost perfect condition. It is quite unusual to find a separate published map in such preservation.

Clement Lempriere was an English cartographer and draughtsman at the Tower of London. He was in charge of the Drawing Room from 1725.

Clement Lempriere: To his Excellency Alured Popple Esq. Governour of Bermuda, or the Summer Islands. This Map ....
Sea chart of Bermuda. Printed in London by C. Lempriere in 1738.