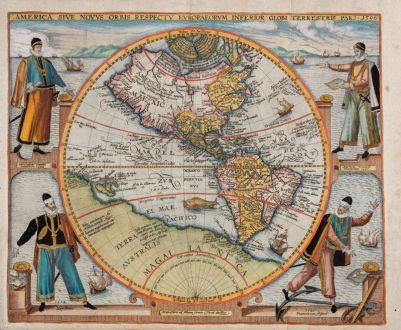 Philip D. Burden in The Mapping of North America about this map (#91):

This beautifully engraved map follows the style de Bry was becoming known for; he was one of the major influences encouraging the full decoration of maps... The map is largely derived from the Petrus Plancius world map of 1594. He clarifies the coastline of I:Dagoa in the Solomon Islands and interestingly calls the southern continent MAGALLANICA. The information acquired by Cornelis Claesz in 1594 from the Lasso chart is incorporated here in depicting a single insular Newfoundland. It incorporates accurately for the first time the White-le Moyne cartography upon a map of America, VIRGINIA being placed more correctly further south.

This rare hemisphere map of the Americas is decorated with portraits of Christopher Colombus, Amerigo Vespucci, Ferdinand Magellan and Francesco Pizaro. The hemisphere is supported by a framework with an anchor, compass and nautical charts. In the background a maritime scene with mountains and sailing ships. In the map itself more sailing ships and a sea monster.

Left white margin outside of the image remargined in the lower half. Excellent condition with a clear and strong impression and beautiful colors.