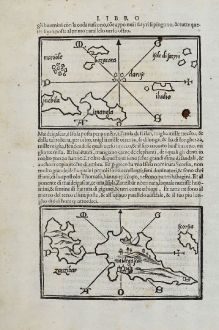 Three rare woodcut maps by Benedetto Bordone on one sheet. The first shows Madagascar with Zanzibar and Mauritius. On verso a map of Scilam (Sri Lanka, Ceylon) and Dondina. Furthermore the mythical islands of male and female described by Bordone as islands in Southeast Asia, named Inebila and Imangla.

Thomas Suarez in Early Mapping of Southeast Asia about the male and female islands:

The final map of Southeast Asia covers the familiar Ptolemaic islands of maniole, bazacata, and isole di satyri, as well as imangla and inebila, to curious islands new to the repertoire of Southeast Asian lands found on printed maps. Bordone, repeating popular lore, explains in the Isolario that the island of imangla is inhabited exclusively by women, while inebila in an island on which only men live. If a women of imangla gives birth to a girl, they keep the child, but if a boy is born, he is sent to inebila at the age of three. 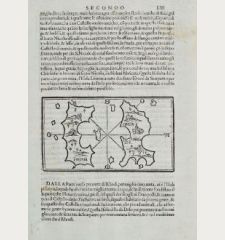